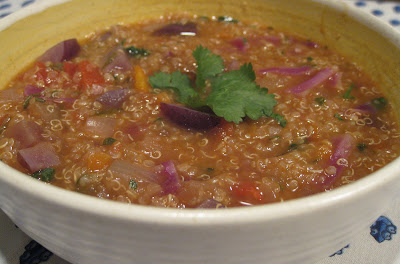 I originally wrote this post in 2009 after receiving  "The 30 Minute Vegan" cookbook as a gift from my husband for Christmas. At that time, it was a book I had been wanting for ages. I love the idea of creating tasty healthy food quickly, especially on work nights.  I modified the following recipe a bit and increased the amount of some of the ingredients so that I would have a big pot of leftovers to feast on throughout the week. The original recipe is on page 158 of the book.

Begin by pouring eight cups of vegetable broth into a large pot. Add 3 tablespoons Tamari (or regular soy sauce), and then also 1 and 3/4 cups of quinoa. (The recipe called for only 3/4 cup of quinoa, but I wanted a thicker quinoa dish rather than just a soup, so I increased the amount of quinoa by one cup).


Add 1 chopped yellow onion, 2 1/3 cups chopped purple potatoes, (again, the recipe called for only 1 and 1/2 cups of potatoes, but I increased the amount), 1 cup diced carrots, 4 or 5 cloves of minced garlic, 1/3 of a large purple cabbage, sliced, 1 tablespoon of canned diced/chopped jalapenos, and finally 1 diced fresh tomato as well as 1 can of organic diced tomatoes. (The recipe calls for two tomatoes, but I only had one fresh tomato, plus I think the combination of canned and fresh gives it more flavor, although it's probably the sodium in the canned tomatoes--I didn't need to add any salt to the soup at all). 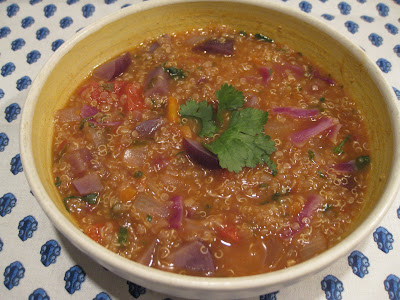 Cover and simmer for 20-40 minutes (The recipe says to simmer it for 20 minutes from when the quinoa was added, but I cooked it for longer so that the potatoes would be really tender.) Once it is cooked, stir in 1/2 cup of fresh minced parsley and 1/2 cup fresh chopped cilantro. (As you may have guessed, the recipe called for 1/4 cup of fresh parsley and cilantro, but I doubled the amount of each as well--yummy!)

This dish turned out to be fantastic! It tastes amazing and fresh, and this recipe became one of my new favorite things--healthy, easy, and really really tasty. I was  specially interested in wholesome home-cooking after the typical seasonal over-indulgences of Christmas cookies, dark chocolate, starch-based foods and other such things, so this soup definitely hit the spot.

In addition, the tone of The 30-Minute Vegan is very friendly and happy, written by a cute husband and wife team and complete with easy-to-follow directions and creative food ideas. I recommend adding it to your collection as well if you don't already have it.
Labels: quinoa stew; The 30-Minute Vegan Cookbook; cookbooks