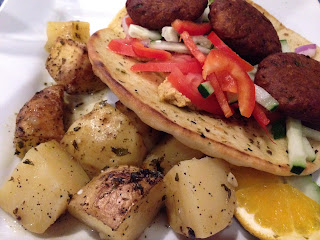 I have been going to Cafe Akroteri off and on for soooo many years now. It's got a great atmosphere, and I enjoy meeting friends for drinks and a catch-up in the bar area. The food has varied off and on over the years in terms of what is available for a vegan, but I have to say their most current menu has the most vegan options I have seen!

Keep in mind, things can change, so when in doubt about ingredients or whether or not something is vegan, be sure and ask your server. 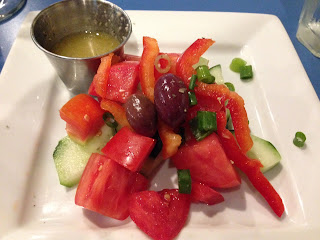 Cafe Akroteri has a vegan falafel on their menu, and you can either order it as a side dish or in a pita. If you get it as a vegan side, they will sub in some hummus for the tzatziki.

And if you ask for a vegan pita, they will leave off any dairy and add hummus, (and it is particularly tasty with a side of the garlic, lemon, and olive oil dressing that you can either drizzle over it or use for dipping!) They will also make a vegan version of their Greek salad upon request. 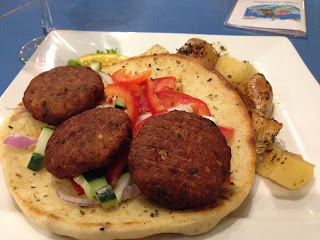 The pita bread is now vegan, as are the lemon garlic potatoes. They still offer a vegan soup, and their hummus is of course vegan and delicious. You can either get the hummus with vegan pita bread or sub in cucumber and tomato slices--I like it both ways! They can also make a vegan veggie skewer dish (souvlaki) with grilled onions, tomatoes, peppers, broccoli, and mushrooms. 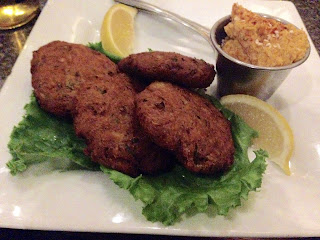 Even though waitstaff and bartenders have changed over the many many years I have been going to Cafe Akroteri, one thing that never changes is the consistently good service--I have always been treated very well here and whoever has helped me has always been very gracious about all of my dietary needs and questions.
Labels: Cafe Akroteri vegan options; Greek food