Vegans in (and around!) Bellingham: Kymi Aeschliman

I am kicking off this new series about local vegans by shining a spotlight on someone whom I have grown quite fond of over these past months. Her name is Kymi and rarely ( if ever) have I met anyone who possesses such a phenomenal sense of humor combined with a such a beautifully compassionate nature. She is truly one-of-a kind and the world is a better place because she is in it. It is my great pleasure to introduce her to you now. 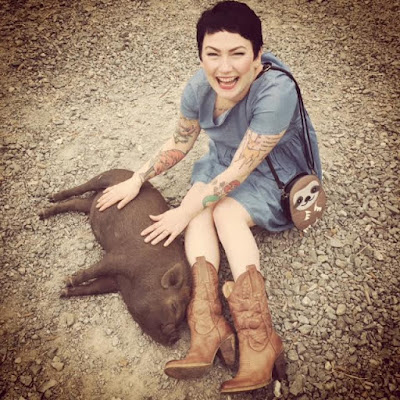 Kymi Aeschliman is a hair stylist at The Grotto Hair Studio and has been happily doing hair there for over 5 years. She has her hands full with her 3 dogs: Olive, Kingsly, and Caper, and two sugar gliders: Opal and Pearl. She enjoys vintage fashion and very large tiaras. She is very passionate about the vegan lifestyle and has been vegan about a year and a half. How wonderful we can help animals, ourselves and the environment simply by changing our routine a bit? When she's not cooing over cute pig pictures on Instagram you can find her tormenting her husband Richie for food (he's the better cook) or watching Disney movie's with her bestie while drinking all the vegan beer. 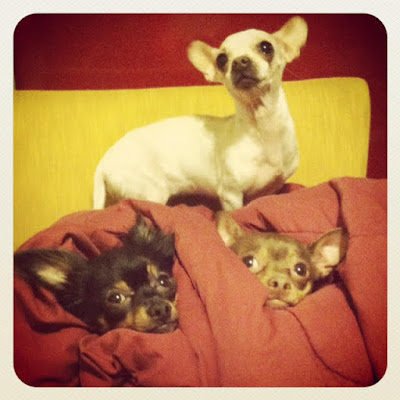 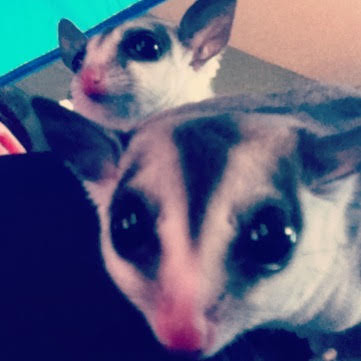 One of the first things you may notice about Kymi when you meet her in person is her extraordinary sense of fashion and style.

“I'm very into fashion, but not really current up to date fashions. I really like shopping around for vintage clothes at thrift shops or antique shops,” explains Kymi. Her other interests include: hairstyling, “smothering my pets with affection, taking long, beer-fueled walks around town with Richie (my husband), and eating vegan grilled cheez while watching Disney movies with my best friend Kelsey.”

Something Kymi has in common with a number of us vegans is her fondness for pigs, and she describes the day she visited to the Pigs Peace Sanctuary as “the best day EVER.” Another thing she has in common with every vegan I have ever met is her love of food. I often say that vegans are typically the most food-obsessed people in the world (myself obviously included!) which of course, I think is a very good thing. And in keeping with that mindset, Kymi says one of the things she enjoys most is food. She enjoys helping her husband cook amazing vegan food for them to eat, as well as going out to eat, and also just thinking about food. The vegan comfort food Kymi craves most is homemade vegan mac and cheez or vegan mashed potatoes with her husband’s mushroom gravy.

Her favorite local restaurant is El Gitano, but she is quick to add that Soy House is a strong second. Among her favorite dishes are the veggie fajitas (vegan style) with extra guacamole from El Gitano, and she also loves tofu pho with extra veggies from the Soy House. (Which reminds me, something else I should let you know about Kymi is that she has a real talent for creating pretty amazing portraits from her veggie pho!)

I charged Kymi with the ever-difficult task of naming three adjectives to describe herself and she offered: extroverted, loyal, and kind, which indeed fit her very well. When it comes to being vegan, she explains how she originally decided to become vegan for ethical reasons, but adds that the health benefits and weight loss were an extra bonus. One thing she wishes people understood about being vegan is how easy it is.

“You aren't living a life of deprivation. Yes, we can live without bacon. Yes we get enough protein.” She explains that dealing with criticism from people who are not vegan can be difficult, and is probably the hardest thing about being vegan. But the thing she likes the most about being vegan is “The beautiful peace that comes from knowing I am doing my best to prevent harm to animals.”

I ask Kymi what she loves most about Bellingham and she responds with how “It's big enough to be a little fun but small enough to be a little quiet,” which I think is a perfect description, and something I also love about this wonderful city. As for the one thing about Bellingham that she would change if she could, “Well, a vegan restaurant of some sort would be nice. Am I right?!”

If you are someone who is interested in being featured as a local vegan on this site, please email me at veganinbellingham@gmail.com. My special thanks go out to Kymi for agreeing to kick off this series with me!
Labels: vegans in Bellingham; Kymi Aeschliman

lea said…
I'd like to make a hair appt. with you. How do I do this? I will look for you more when I have more time.