One of the questions most frequently asked of me is what made me decide to start this blog? I usually explain that when I began writing, I hoped to create the kind of resource that I was always looking for myself—something that could serve as a guide to help people discover vegan-friendly restaurants and businesses in Bellingham. Luckily for me, it has since turned into so much more, helping me connect with a community and network of amazing people I never would have known otherwise!

I wrote my very first post in July 2008 in which I mentioned the difficulty vegans sometimes faced going out to eat in a predominantly non-vegan world.

“Although we vegans are a minority, we all have families and friends who we socialize with, and going out to eat as a vegan in a non-vegan world can be intimidating and nerve-wracking. My experience has been, however, that most restaurants have employees/owners/chefs who are willing to help and will be very accommodating. Most people realize that although there may only be one vegan in a group, that vegan does come with a group of non-vegans, so we do bring business with us wherever we go. The more vegan-friendly a place is, the more business they will get from me and the people that come with me, which means by being vegan-friendly, they are also increasing their profits.”

In many ways, highlighting a vegan-friendly restaurant is a win-win. If a restaurant starts getting more business because they are receiving recognition for being vegan-friendly, then hopefully they will continue to be vegan-friendly. Which then, in turn, gives us more choices of where we can go and what we can eat. So my endorsement of a vegan-friendly place is a way of thanking and recognizing the business for the positive results of their efforts, and my way of encouraging them to keep up the good work! And then once I share my experiences and thoughts with all of you, hopefully that helps you make informed decisions about where to go and what options are available to you. This in turn creates a system where you can share great tips with me that I wouldn’t otherwise know about, which I can explore and then share once again with all of you, etc. etc.


When I go to a restaurant with friends with the expectation of having a drink and not necessarily finding anything to eat, I am pleasantly surprised when that restaurant agrees to modify a dish from the menu and make it vegan for me. I am always heartened when I stumble upon restaurants that don’t claim to be vegan-friendly but will actually make me something vegan when I ask.

However, when a restaurant markets, advertises, and promotes itself as being vegan-friendly, I do hold them to a somewhat higher standard. I am more likely to suggest to my friends and family that we patronize the openly-vegan-friendly business than the one where I may or may not be happily surprised.

If a restaurant specifically highlights that it has vegan options, then it naturally attracts clientele based on that claim. Which means there is an expectation that they will have vegan options, and that their servers and waitstaff will be aware of those options. If on the restaurant’s website it states: “Nearly all of our vegetarian menu items  can be made vegan,” then there is an expectation that more than just one or two out of the eight vegetarian items listed on the menu can be modified to be vegan. Likewise, if a restaurant seeks me out, invites me to come and check out their vegan options, shares their aspirations and good intentions with me and impresses me so much that I publicly endorse that restaurant as being vegan-friendly, I feel like I have a certain responsibility to provide as much information as possible about that same restaurant if things change. 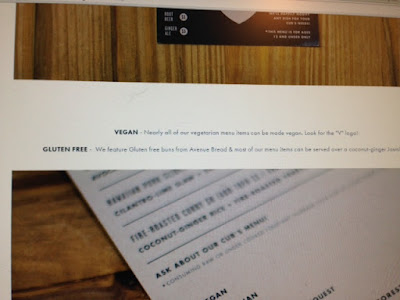 I am sharing all of this with you now to hopefully frame the context for this post, which is primarily about Aslan Brewing Company. Last summer I was invited to Aslan and had a really enjoyable visit with Paul Arsenault, who at that time was a head chef at Aslan. He really impressed me with both his food and his cooking philosophy. Paul was also the creator of that amazing curry that so many of us loved that is no longer on the menu.

As many of you already know, I recently heard from a number of people who were disappointed because it seemed like Aslan was becoming less vegan-friendly. Several of their favorite dishes were either gone or no longer available as vegan. You may have also seen the comments that owner Jack Lamb left on the post about my decision to move the meetup from Aslan to Soy House. I thought it was really great that in these comments Jack expressed his desire to have more vegan options at Aslan, and I know that so many of us are appreciative and supportive of that desire. I hope that Aslan does increase their vegan (or vegan-izeable) options and that some day we can have a meetup there. Since July seems to be the month where changes should be happening, we can definitely continue to check back and see how things progress.

One thing I also want to share with you, however, is that during the course of all of this, I heard from several readers who had questions about the poutine gravy (that Jack mentioned would be made vegan once again beginning in July). It seems that there is some confusion about whether or not this gravy (when ordered without cheese) was ever actually vegan to begin with, as some people have heard directly from servers and staff on different occasions that the gravy has always contained dairy and butter as its base, meaning it was never actually possible as a vegan option.

Given Jack’s comments on my blog post, I decided to ask him about the contradictory information in the hopes of getting clarification from him in an email. His response is below:

“When we first opened, the gravy was listed as vegetarian, because it was made with traditional roux. After about a couple months or so, I initiated the change to go vegan. Only recently did we revert back to vegetarian. We were receiving concerns about its consistency and overall quality--its appearance and taste seemed to change every day. Our kitchen shared their concerns with the way in which we were making gravy, since it was kind of a frankenstein `roux` that was hard to control compared to traditional methods. I then made the decision to try vegetarian again, which has solved our consistency problem, but now raises issues with vegans...it’s hard to please every one. When it comes down to it, I cannot justify offering a subpar tasting product for the good of having a vegan item. I hope you understand and value that kind of mindset. However, we are back at it, and are going to try another method to preserve its vegan status.”

According to this email from Jack, there is no question about this gravy having once been made vegan. In fact, it was he who initiated the change from the vegetarian recipe to a vegan version, and the only reason it ever went away is because of the inconsistent quality of the“frankenstein” roux. While I happen to think making a vegan roux is pretty simple, I do understand others might struggle with this. And as a vegan who enjoys delicious food, I also have no desire to eat a sub-par-tasting item--(we vegans have had our fair share of sub-par tasting items when dining out in a predominantly non-vegan world!).

In my response to Jack, I let him know I was concerned that there was still some conflicting communication about the ingredients in the gravy that he might want to look into. I also emphasized the importance of letting his customers know when/if the key ingredients in an item changes, especially if it can no longer be made to satisfy a certain dietary need or suddenly contains common allergens. His response was as follows:

“As for communication issues, I fully agree how key that is. Every server is given a ‘Food Bible’, which lays out every dish, ingredient by ingredient, and clearly identifies GF, Vegan, Veggie, nuts, other allergies, etc. They are quizzed and expected to know what goes into every dish. This shows yet again the difficulties of restaurant operations, because as a manager, you can do all you can to prepare your staff, but at the end of the day, it is up to that staff member to remember and respond correctly in the heat of a rush.”

I understand mistakes happen. Mistakes happen all the time, in restaurants, in my everyday life--I get that. Everyone makes mistakes, as the saying goes. But I am not talking about a mistake that may happen “in the heat of a rush.” The thing is, for those of us with food allergies or “special” diets (meaning diets that differ from the standard American omnivorous diet), we are not only dining on the food we order when we go out to eat, we are dining on the trust and integrity of the business we are patronizing.

And so to those of you who were told by representatives of Aslan on repeated occasions, (be they employees, waitstaff, chefs, or owners) that the gravy has always contained butter and dairy-based ingredients, even though you had also been told on repeated occasions that the gravy could be made vegan, I understand if you still have some confusion and concerns. And I wish I could completely and with assurance allay any doubts you may have. But I am afraid I can't. All I can do is share with you the information I have.

In closing, I know from recent conversations that despite this confusion, there are a considerable number of us who want to believe in a vegan-friendly world where honesty and integrity are incorporated into everyday business practices. We want to do whatever we can to support the cultivation of such a world in the hopes that our trust is not misplaced, and so we are really looking forward to Aslan’s new menu and to trying out new vegan options. (And Jack, if you happen to read this and have actually made it through to the end of this very long post, I hope you will continue to communicate with me and keep me updated on new developments.)
Labels: Aslan Brewing Company; Being Vegan in Bellingham

Nightsinge said…
I was definitely one of the people who stopped frequenting Aslan due to their vegan-restricting menu changes. But damn, I've never ever had a long, thoughtful response from a chef or restaurant owner like the one Jack posted to your blog earlier. Thank you, Jack. I hear you about the challenges regarding quality and consistency of food offerings. And I so appreciate that you're hearing us and really trying hard to make it work. That goes a long way with me.
July 6, 2015 at 12:06 AM

Bee @ Cowboy's Girlfriend said…
Just discovered your blog and SO THANKFUL - my best friend who is vegan is visiting me in October and I don't know Bellingham all that well, and I was so worried we wouldn't know where to take her. This is so exciting!
July 7, 2015 at 4:24 PM

Clarissa Mansfield said…
Hi Bee! I never thanked you for your comment, so I am doing it now. Thanks so much! It's comments like these that inspire me to keep doing what I am doing, and I am really happy if this blog is helpful. I am working now to update some of my older posts and reviews, and if you have any questions or want some recommendations, please don't hesitate to contact me. (veganinbellingham@gmail.com) :)
August 24, 2015 at 11:50 AM