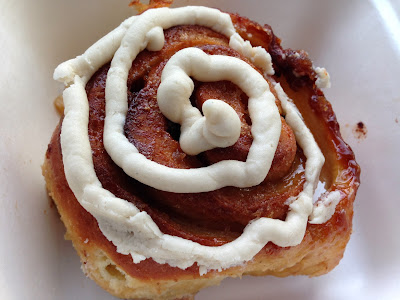 I  know I have said it before, but we Bhamsters are really lucky to be so close to Vancouver. Vancouver offers us so many amazing vegan-friendly places to eat. And lucky me, I finally had a chance to check out Fairy Cakes yesterday! If you are ever in Vancouver and looking for some sweet vegan goodness, you must stop by Fairy Cakes. You won't be disappointed. They are also located super-close to Nice Shoes, which is a wonderful vegan shoe and accessory store-- (they also have some really cute purses and vegan bags, and yes, I did buy a new purse while I was there. And to my friend Elizabeth: I hope it's not the same as one you already have!)

But now back to Fairy Cakes...The woman working there was so funny and so nice. We had a really great chat with her, and she also told me which of her baked goods included corn starch, and which ones did not, since I can no longer eat corn. Lucky for me, the treat I had been eyeing since I first walked through the door did not have any corn in it!

In case you aren't familiar with Fairy Cakes, it is a fabulous little cupcake and treat shop where everything is vegan, and organic + fair-trade ingredients are used. Not only is everything vegan, Fairy Cakes also caters to people with other dietary needs by offering nut-free and gluten-free options.

I ordered the sticky bun I had my eye on to-go, and happily noted that the to-go container was compos-table, which meant I could put it in my Food Plus bin once I got home. The bun was the most delicious chocolate chip bun in the world. The bottom of the bun had a sort of caramelized crunchy sweetness, and the whole thing was decadently tasty. I will admit that even though I planned on taking it home with me, I had eaten the whole thing before we even got to the border crossing. It was soooo good. Next time you are in Vancouver, stop by Fairy Cakes and pick yourself up a little treat. You won't regret it!
Labels: vegan in Vancouver; Fairy Cakes; vegan desserts; vegan shoes; Nice Shoes