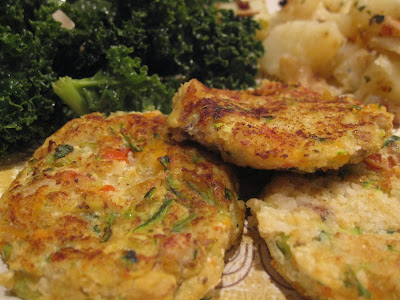 Sometimes I get into a cooking rut, usually when I am tired or have been really busy and cooking starts to feel more like an obligation than a joy, which I think is an absolutely terrible feeling to have. Then I have to choose to become inspired again, and this usually happens in a number of ways. Sometimes it's a new cookbook, but it can also be dining out and having either a particularly good or particularly bad meal at a restaurant. Or other times it is as simple as me deciding to put on some good music and rummage through the fridge for creative cooking ideas.

It can be very liberating to clear off the largest kitchen counter in order to fill it up again with every item there is in the veggie bins, and ponder "What can I make with all of this?" And often I can even turn it into a game with myself--a true challenge in creativity--to take the basic flavor concepts of what I know I like, but make myself come up with something new without the aid of any cookbooks.

The liberating part comes with the risk--I might make something wonderful, or I could make something not-so-wonderful. Or I could make something I like, but because I am in the cooking "zone," I forget to pay attention to how I do it, which makes relaying a recipe later kind of difficult. I may even lose track of time and forget about other things I should be doing, like finishing my laundry or organizing files in my study. But maybe those things can wait. And who's really to say that I won't be able to re-create the same dish later, even if I don't write it down? If it's good, the essence will stay with me. And sometimes, what's more important than anything at all is truly being in the moment. Especially if that moment is satisfying and fun and makes you forget all your worries, if only for a little while. 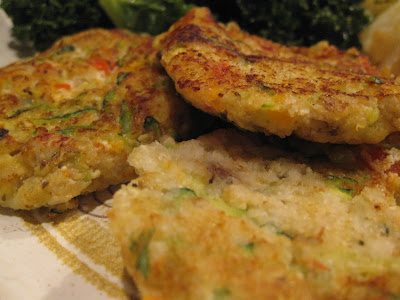 So tonight I decided to turn on my Moby Pandora channel and get to it. I realized that I had some potatoes that needed to be used up and thought some slow roasting in the oven with garlic, parsley, and green onion would do the trick. Then I threw together a kale salad with some more fresh parsley and a lemony garlic and herb olive oil and tamari dressing, which I let marinate while I finished cooking. After that, in a large bowl I combined some organic extra firm silken tofu, some grated zucchini, grated onion, grated carrot, minced red bell pepper, minced celery, some green onion, some spices and seasonings, and some panko bread crumbs, and then cooked these little veggie patties that turned out to be quite tasty. I tried both pan-frying and baking them to see which way was better, and ultimately settled on baking--no oil required and they held together better.

Everything turned out great and I enjoyed myself tremendously. A friend once told me that as he grew older, he noticed that he began to consume more and create less, and this disturbed him. He decided to make a conscious effort to create more because he believed this was something that would keep him feeling youthful and happy and engaged with his own life. I think there is some truth in this philosophy. Sometimes it is good to write or draw or make something just for the feeling you get making it. And I really believe that creating food can be a very fulfilling form of artistic expression. And so I encourage you to step outside of your normal cooking routine and try something new. Who knows what you might come up with.
Labels: made up recipes; creativity

Felicity said…
The whole meal looks fab, especially the patties. I love it when I make something new and it turns out omg good!
March 1, 2010 at 11:23 AM

Clarissa Mansfield said…
Thanks Felicity! You should be familiar with that feeling since you are always making creative, lovely and original delicious dishes that make me wish I could come over to your place for dinner! Or lunch. Or breakfast. :)
March 7, 2010 at 1:03 PM